When most people mention gastronomical experiences in Peru, they think of the exotic animals to this mysterious Inca kingdom: guinea pig, alpaca, llama. But aside from chasing obscurity, if you also care about the taste, you shouldn’t miss these layman’s delicacy that surprise you from the street corner next to your residence, and they are usually a delight to both your taste buds and your wallet.

#Ceviche Ceviche is by far the most impressive dish in Lima. It provides the buttery smooth sensation of eating quality Sushi, but instead of tracing hints of sea flavor in between rice and seaweed, it offers a heavy punch of lemon sour to make your mouth flowing like a river on first encounter, then tenderness of sea creature takes over to provide a comfortable cushion between chewing. The aftertaste is satisfyingly sweet from limon overstimulating your taste bubs. This means you can consume a much larger quantity of raw fish without ever feeling mouth dry or smell the fishy-ness.

In 2014 when I was wandering in the local wholesale market I witnessed the locals formed a sizable circle around a moving cart on the street, and everyone is eating quietly and ceremonially. Though I didn’t have a chance to try any, I made a mental note and tried a local spot in Cusco, which is 22 hours bus ride away and was very underwhelmed. In 2016, I am back in Lima for the 3rd time. In 2 days I ate 3 exceptional ceviche dishes that made me smile like this. Here is a list in order of my preference.

This is an hole in the wall ceviche place, hidden under some large office building and contains only 10 indoor seating and some 30 seats outdoor. Though through out the time when I ate there, which is 3pm in the afternoon, there was not a single seat kept empty for more than 15 minutes. Their selections were focused on seafood and very extensive. Soup, cake, fried fish fillet, a one-stop shop for almost all form of seafood I encountered in Peru. On Ceviche: their sauce was a perfect sour starter to clear your palettes for the fish that comes afterwards. fish tasted fresh and tender. the sweet aftertastes come right when you think your tongue is giving up under the besiege of lime. and then you take one kernel of corn or a byte of sweet potato, to reset the battleground. simple but perfect. This is a restaurant sitting right on the beach cliff which is converted into a modern shopping mall that overlook the ocean. They offer different ceviche mixture, the best we had was the mixto? appetizer. It combines traditional ceviche, sweet potato, fish cake, fried fish fillet,shrimp and octopus on a single plate, in a well presented and separated fashion (as oppose to the ceviche mixto from Punto Azul, see 1). The ocean breeze, the quiet struggle/enjoyment coming from the surfer down the ocean, and pleasant background music provided a perfect harmony in environment and delicacy.

I would still come back in a heart beat even though this is the last on the list. It’s a ceviche shop that got stripped to the bone. The only ceviche option is ceviche + Chicharrón (fried pork belly). and their fish is as fresh and tender as any. Their lime juice is overpoweringly sour, though the salty chicharron provided a perfect remedy that converts the sourness to sweet. Though from an eye of an outsider I deemed Punto Azul’s sweet aftertaste is more natural. Though the price was 20 soles (6 USD), which is unbelievably cheap for such large dish of fish. ##Anticucho, Mollejitas, Rachi, Pancita Beef heart, chicken heart, cow stomach, pork stomach, and other miscellaneous parts. One of teammates summarized this dish as ‘all the animal parts that you won’t find in the US’. Yes, and I would correctly further as ‘all the animal delicacies they are wasting in the US’. Once you can over the initial unfamiliarity, these organs provides a texture and flavor that are different from their meaty brother, giving a totally foreign but exciting appearance to your taste bud. These items usually comes together as a combo (parrilla mixto), and you can find them range from the smallest street stands to the high ceiling majestic dining experience. Though the best I had stands on the corner of this unnamed street, where the taller chef has a tattoo of fork on one arm and a spoon on the other, while the shorter chef cast this intense look while cooking that makes you think he is casting some sort of spell into the food in front of him. Using potato as alto, and marinated meat as the mezzo-soprano, and some amount of spicy sauce as the soprano, the flavoring seems to steep through your tongue and comes out of your sweat.

To finish this off, don’t forget the desserts: picarones (a fried dough, deep in syrup), mazamorra (a plum gel), and arroz con leche(rice with sweeten milk), all made from natural ingredients and washes away the spiciness you just had.

#Cuy (Guinea Pig) Cuy is this cute little pet that’s native to the Andes. When alive they always have an inviting posture. After cooked though you can still only find them inviting in a few places. or dead in the native’s way of cooking. 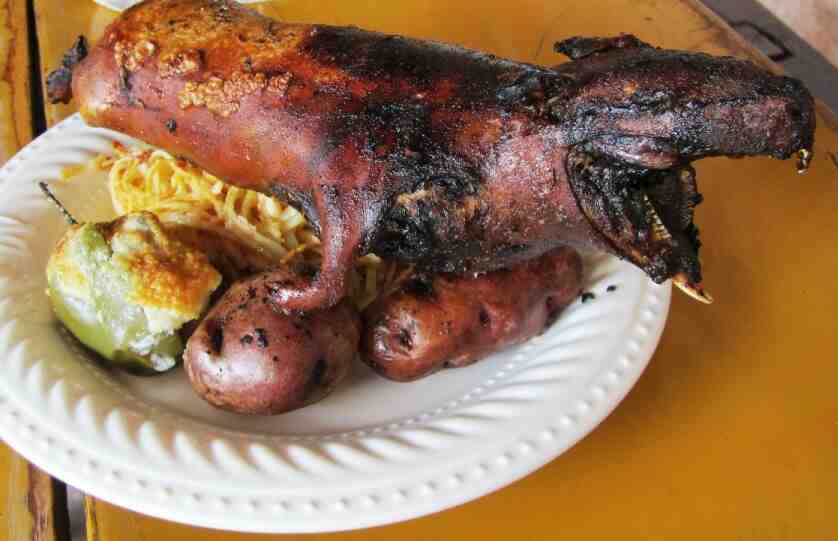 this is my first encounter with cuy, in tipon, some 30 minutes away from Cusco. The local restaurant is a farmer’s home, which is supposed to be famous among the local people. They stuff some spice and grass condiments into the belly, bake the cuy in over and serve whole. It was a interesting experience to see a knife as big as the animal split it into quarters and you can pick your section up and bite. It does have a crispy skin, and tender meat. But the lack of flavoring, even salt, was an unforgivable shame. This other deep fried cuy we joked it as KFC, Kentucky Fried Cuy, found in an upscale restaurant in downtown Huaraz, and it only has the look of fried chicken, and all other aspect, including texture, flavor, and convenience of consumption, were inferior to fried chicken pieces. The skin has such a thick bread skin that it was hard to bite through, and the amount of meat left for enjoyment is minuscule. I was going to give up on cuy, until I saw this historical restaurant in a side street of Lima with 50 years of history, whose name sounded something like the ‘cuisine from the south’. The Inca culture centered around Arequipa area in its hay day and that was where cuy used to be the stable of the local people. This puts my curiosity up again, and finally, the result is this garlic and spice infused, silky tender meat that are still substantially large enough that you can taste it. it probably has the worst look and feel, but hey, any cooked cuy looks worse than alive, so I rather to have it be tasty. Credits to YN who helped me proof read this article.