###An (Unpleasant) Encounter with Calcite

Calcite is a carbonate mineral and the most stable polymorph of calcium carbonate (CaCO3). The other polymorphs are the minerals aragonite and vaterite. Aragonite will change to calcite at 380–470 °C, and vaterite is even less stable. Wikipedia

Before going to Castleton Tower in Utah, I only know the existence of sandstone in such places. There was foreboding talks about this other type of devil in the dessert on Mountain Project

… and stem/face climb the calcite, which has a friction coefficient similar to snot.

And the other party who we encountered at the base of the approach mentioned calcite as climbing on glass. How bad can it be though?

Turns out, this is probably the second smoothest surface I have encounter, ranked just above the glacier-polished golden granite in Tuolumne. The difference though is glacier can only polish the exposing face of the rock, while calcite works on surfaces on any direction. Think the friction you can get from a bathtub if you are wearing a rubber shoe. And then flatten the bath tub, put 2 next to each other, half a meter apart, then there is the chimney pitch on Kor-Ingall.

I went through the maneuver of removing my bag, then removed my helmet, then exhale vigilantly, plus some newly acquired shoulder twisting technique from yoga, finally squeezed myself though the slippery narrow chimney.

###An (Even More Unpleasant) Encounter With Stucked Rope

As the beautiful sunset greet us on top of the 400 ft tower, unlike the other young and bold local climbers still enjoy their pipe on the top, we want to reach the floor before darkness devour us. There is a whole page story on my friend’s blog about the obstacles we might encountered on the North Face rappel. We had our own version. 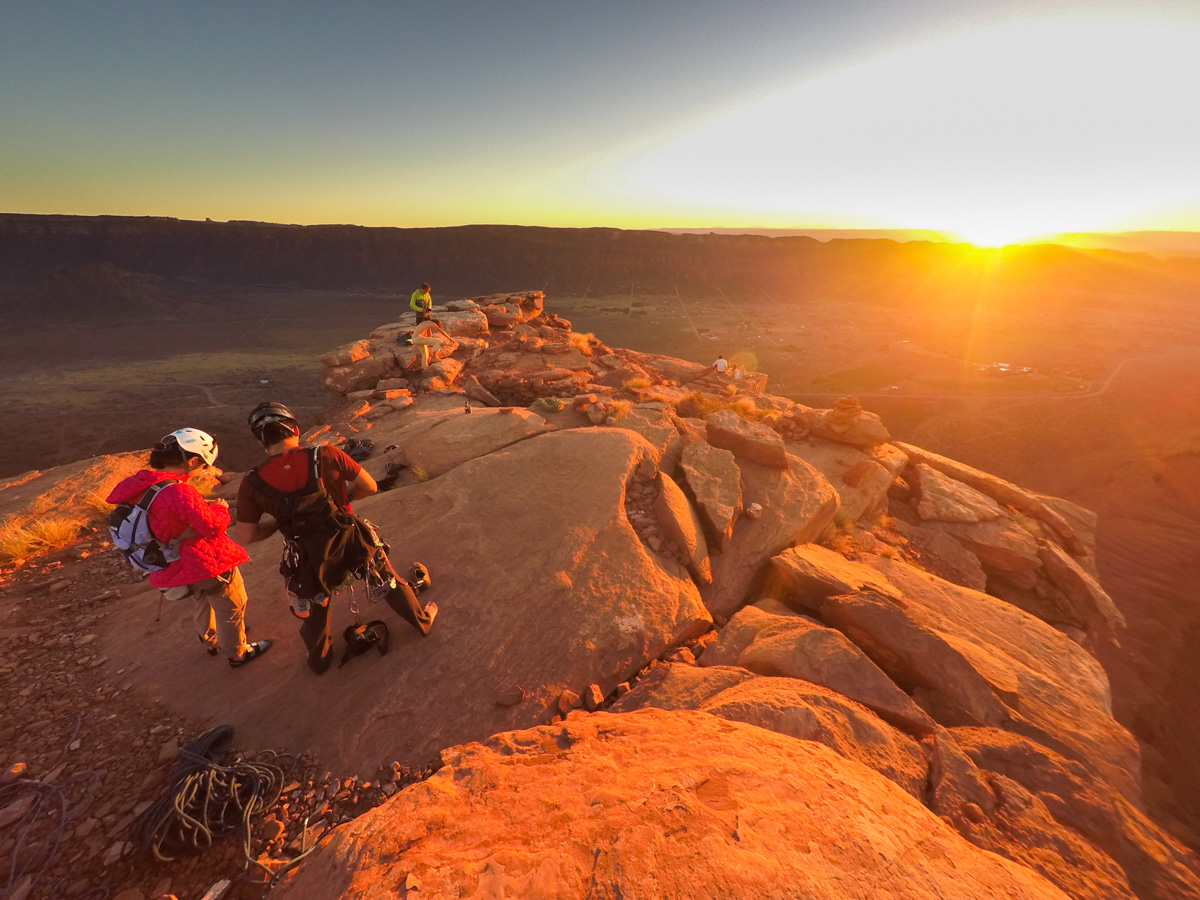 The first rappel ended just shy of 40m under below the rap anchor. When I was coming down the rope was piled on top of a flake/horn formation that’s probably 5 - 7 meters above the next anchor station. I quickly pushed the rope down, reached the anchor, and let the 3 other teammates come down. On their way down each person also naturally landed on top of the flake, then moved around it to get down. We didn’t realized gravity would work the rope the same way, so as we pull the rope with the last bit of sunlight glittering over Castle Valley floor, the rope wrapped itself around the horn and stuck one of the strand through the little gap. Tried shaking, pulling, cursing, praying, nothing happened.

You can see the rappel from this picture, directly follwing the huge flaring chimney

Thanks for our pipe-fed buddy at the top, they rescued our rope on their way down. Otherwise we would possibly be ascending this 5.11 to reach the horn, free the ends, and then down climb it in the dark.

Some of you might have seen the Citibank commercial or the Magic Backpack from Gopro, both are excellent climbing videos featuring this corkscrew tower with a slopped top. The commercials made it look as easy as flipping pancake. Here is a little struggle we had just at the bottom section of the corkscrew.

Thanks to Botao for photo, and Phoebe and David for trust and companionship.